Through My Eyes by Tim Tebow with Nathan Whitaker


“Through My Eyes” is a retelling of Tim Tebow`s story based on how he recalled and viewed his journey in life. Before he was born, his mother was advised to abort him because of the dangers her pregnancy entails to both her and the baby she was carrying. Through faith, Timothy “Tim”/”Timmy” Richard Tebow was born in Makati City, Philippines on August 14, 1987. In this book, he narrates his journey which led him to win the Heisman Trophy in 2007, become part of the NFL as a quarterback and eventually establish his foundation in 2010.

Mr. Tim Tebow`s story is inspiring and motivating me to achieve my goals and dreams in life with the intent to serve the Lord and other people. I was able to get a glimpse of his life growing up with a family whose values are centered on their faith. His stories of how he took care of his health, motivated himself to do better as a person and athlete and stayed faithful despite the difficulties he faced inspired me to become a better person regardless of what the world say. I admired his compassion to the needy especially children who are differently-abled or going through the difficulties of having illnesses. The way he told stories in his life with honesty especially during times his team/s experienced losses was very inspiring because it was relatable. Even though he`s now a popular public figure, it was motivating to know that all of us experienced and will experience losses in life no matter how hard we work. We just have to keep on getting better and trusting the One that matters the most.

His foundation, the Tim Tebow Foundation holds an annual event called “Night to Shine” which is a prom for people with special needs to be celebrated, cheered and uplifted.  Last year, CCF held its very first Night to Shine event in the Philippines.

His foundation believes in caring for orphans which is why the orphan care program has supported 2,780 children to-date and has granted 56 adoptions aids to families. The program give monthly adoption aids from USD 7,000-10,000 which supports families who took the courageous choice to adopt. You may read more about the wonderful news and results of this program here.

Timmy`s Playroom is basically a customized room for children in hospitals. Children who are going through the difficulties of their illnesses can come, play and have fun in this room. This is where they can just be children despite their medical conditions.

The Tim Tebow Foundation along with CURE International, a Christian non-profit organization which focuses on charitable medical care, built the Tebow CURE Hospital in Davao, Philippines. It only opened on May 2015 but they have already performed 650 life-changing surgeries to-date. This hospital caters to Filipino children who have orthopedic conditions. To know more about this, you may read here.

The W15H program is for those deserving children who are going through life-threatening illnesses and wishes to meet with Tim Tebow. It provides a one of a kind experience and also provides accommodations, customized daily activities, gifts and more.

Anybody can be a part of the endeavors of the Tim Tebow foundation by being a member of the "Team Tebow" or by simply being involved in ways you can. To  know more, you may click here. 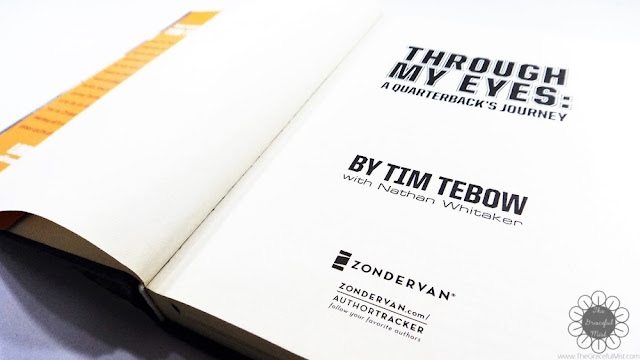 The book is mostly appropriate for the general public. Mr. Tim Tebow mostly talked about his journey in life which involved his faith, athleticism, and compassion to people.

It is truly amazing to read the story of someone who is a role model to many and has such great morals centered on his faith. This world is blessed with a man that shines his light upon it. Through his faith and good works, I hope and pray that he will bless, inspire and touch more lives.

Mr. Tim Tebow will have another book entitled “Shaken” which will be for sale on October 25 , 2016 at WaterBrook & Multnomah. I`m quite thrilled that he has another book which updates us on his experiences and how he has been since being with the Denver Broncos, New York Jets, New England Patriots, and Philadelphia Eagles.

Do you know Tim Tebow? What have you learned in knowing/watching his journey? Have you read his book? You may share your thoughts in the comments` section below. Have a brightening and blessed week!


CURE International - About | Website
Posted by The Graceful Mist on October 15, 2016